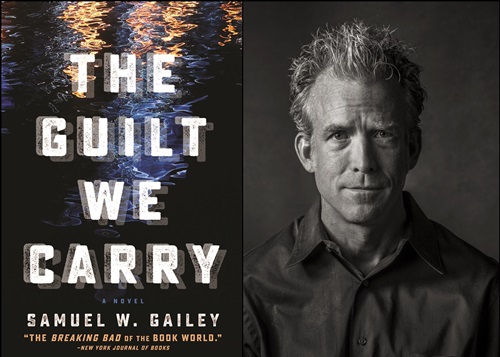 Since the tragic accident that brutally ended her childhood, Alice O’Farrell has been haunted by her past. After her complicity in her younger brother’s death, Alice runs away from home and lives on the streets. Everything changes when she discovers a duffel bag containing 91,000 dollars. However, Alice quickly finds herself having to escape circumstances far more harrowing than her own past. When the lives of those closest to her are threatened, Alice is faced with her day of reckoning.  In the end, The Guilt We Carry is a story about redemption and forgiveness, but at what cost?

Samuel Gailey was raised in a small town in northeast Pennsylvania (population 379) and now resides on Orcas Island with his wife, author Ayn Gailey, and daughter. The Guilt We Carry is his second novel, following the critically acclaimed Deep Winter. Gailey’s novels are intriguing studies of human nature and portray how the simplest act of fate can alter and shatter lives. Before writing novels, he worked as a screenwriter, writing and developing shows for Showtime and Fox. Samuel is a founding board member of the Orcas Island Literary Festival.

The Guilt We Carry (Hardcover)