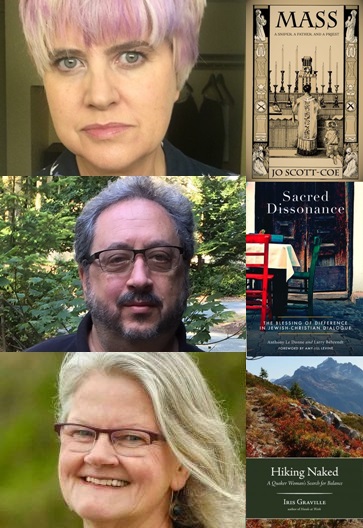 Join us in the readings gallery for this great bouquet of talented writers as they present their wide-ranging works. There is truly something for everyone at this event!

Larry Behrendt is a contributor to Sacred Dissonance: The Blessing of Difference in Jewish-Christian Dialogue which explores the essential distinctions between religious identities and the cultural boundaries between Jews and Christians. Co-authored by colleagues deeply committed to their respective faiths—one a Jewish lawyer, one a Christian New Testament scholar—this book stands in opposition to the notion that all religions are basically the same, an idea commonly put forward in many secular circles or among those who follow personally appointed folkways rather than traditional religions.

Iris Graville's Hiking Naked: A Quaker Woman's Search for Balance has been received to great aclaim, especially here at Village Books. Knocked off her feet after 20 years in public health nursing, Iris Graville quit her job and convinced her husband and their 13-year-old twin son and daughter to move to Stehekin, a remote mountain village in Washington State's North Cascades. They sought adventure; she yearned for the quiet and respite of this community of 85 residents accessible only by boat, float plane, or hiking.

Jo Scott-Coe’s new book is Mass: A Sniper, a Father, and a Priest, a first-time exploration of the relationship between the UT Austin Sniper of 1966 and his priest mentor, Rev. Joseph Leduc. Jo Scott-Coe’s work has been published widely in venues including Tahoma Literary Review, Talking Writing, Catapult, Salon, River Teeth, Ninth Letter, and Fourth Genre. She is an associate professor of English at Riverside City College in Southern California.

Sacred Dissonance: The Blessing of Difference in Jewish-Christian Dialogue (Paperback)

Mass: A Sniper, a Father, and a Priest (Paperback)