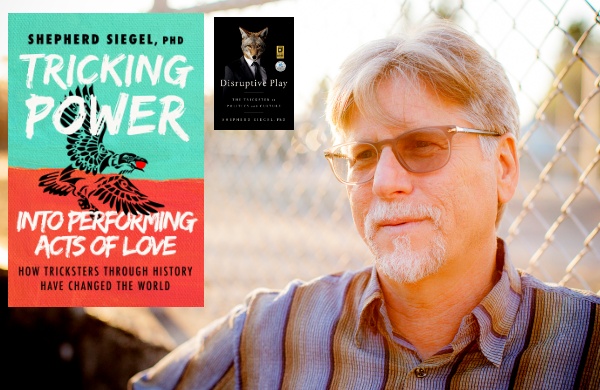 Dr. Shepherd Siegel is coming back for what is sure to be another entertaining event! (At his last event, there was a pie in the face so we're not kidding.)

We are still operating at a limited capacity for our in-person events so we recommend pre-registering on Eventbrite to reserve your seat.

Where do Muhammad Ali, Yoko Ono, Buster Keaton, Signifying Monkey, Michaela Coel, Sacha Baron Cohen, The Yes Men, Mae West, Abbie Hoffman, Yayoi Kusama, and Dolemite intersect? At Trickster, the oldest archetype known to humanity. Tricking others and themselves, they stumble into moral discovery. Tricking Power is about the magic that comes with this malarkey, how it upends social orders and lifts the veil on a utopic world, The Play Society.

Dr. Shepherd Siegel, a descendant of oil barons and bootleggers, grew up in the San Francisco Bay Area in the midst of that whole utopian sixties thing. He was a rock and jazz musician, then educator. He earned his doctorate at UC Berkeley, with studies in anthropology and special education, all the while implementing innovative internship programs for troubled and troubling youth, including those with disabilities. Siegel has over thirty publications in the education field and has been recognized for many achievements, including but not limited to awards from Foreword Reviews and from the Colorado Independent Publishers Association for his previous book, Disruptive Play: The Trickster in Politics and Culture. Somewhere in there he played with the jazz trio Swingmatism and the power pop band Thin Ice.

*Online registration closes one hour prior to the event. Seats may be available at the door.

Tricking Power Into Performing Acts of Love: How Tricksters Through History Have Changed the World (Paperback)