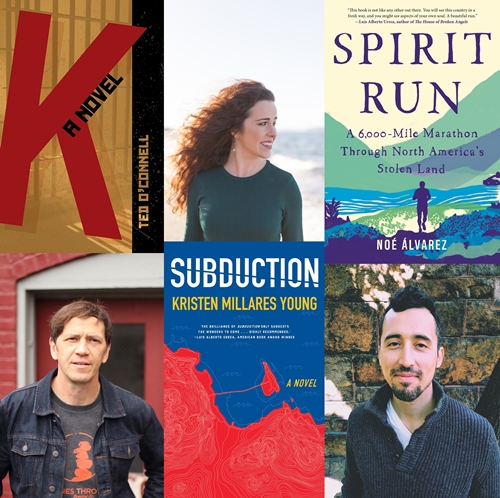 Village Books is thrilled to kick off our Virtual Lit Live series with a trio of fantastic authors. Join us as we hear from local author and musician, Ted O'Connell, Kristen Millares Young, and Noe Alvarez. They will read from and discuss their new books and will take questions from you. Ted will also provide a couple of musical selections so this is one event you will not want to miss! We're also offering 10% off when you purchase all three books together! Just enter coupon code: LITLIVE10 during checkout to save a few dollars and support three fabulous authors.

On K: A Novel: Professor Francis Kauffman finds himself tossed into the notorious Kun Chong Prison after he unwittingly ignites a political insurrection at his Chinese university. From there, his sentence grows stranger by the hour as he struggles with the weight of his imprisonment and the secrets of his past.

Winner of the Tobias Wolff Award in Fiction, TED O'CONNELL is a writer and musician whose creative products have been featured in literary magazines, taverns, and music halls throughout the country. He is a Bellingham boy who gigs with the Prozac Mountain Boys and The Scarlet Locomotive. A tenured faculty member at Skagit Valley College, he has twice served as a visiting professor in China. His debut novel, K, made BuzzFeed News’ list of “21 Great Books from Small Presses” and received a glowing review from the New York Journal of Books, which claimed that K "reads like a mix of Orwell and Borges, with a dash of wide-eyed Kerouac.”

Subduction follows a Latinx anthropologist, Claudia, as she embarks on fieldwork on the Makah Indian Reservation carrying serious baggage – her husband just ran off with her sister. Claudia loses control as soon as she arrives in Neah Bay, where she begins an affair with Peter, the son of her best research participant. Claudia helps Peter’s family convey a legacy delayed for decades by the death of his father. But her presence, echoing centuries of fraught contact with indigenous peoples, brings lasting change and real damage.

“At its heart, Subduction is all about stories — the stories that constitute personal, family and cultural identity and, perhaps more important here, the stories that people tell, about themselves and to themselves, to make life meaningful and livable.” - Washington Post

KRISTEN MILLARES YOUNG is the author of Subduction, a Paris Review staff pick called “whip-smart” by the Washington Post. A prize-winning journalist and essayist, Kristen serves as Prose Writer-in-Residence at Hugo House. Her reviews, essays and investigations appear in the Washington Post, Literary Hub, the Guardian, and elsewhere. She was the researcher for the New York Times team that produced “Snow Fall,” which won a Pulitzer Prize. From 2016 to 2019, she served as board chair of InvestigateWest, a nonprofit newsroom she co-founded to protect vulnerable peoples and places of the Pacific Northwest.

On Spirit Run: A 6,000-Mile Marathon Through North America's Stolen Land: Growing up in Yakima, Washington Noé Álvarez worked at an apple-packing plant alongside his mother, who “slouched over a conveyor belt of fruit, shoulder to shoulder with mothers conditioned to believe this was all they could do with their lives.” Escape came in the form of a university scholarship, but as a first-generation Latino college-goer, Álvarez struggled to fit in. At nineteen, he learned about a Native American/First Nations movement called the Peace and Dignity Journeys, epic marathons meant to renew cultural connections across a North America older than its present political borders. He dropped out of school and joined a group of Dené, Secwépemc, Gitxsan, Dakelh, Apache, Tohono O’odham, Seri, Purépecha, and Maya runners, all fleeing difficult beginnings.
Telling their stories alongside his own, Álvarez writes about a four-month-long journey that pushed him to his limits. He writes not only of overcoming hunger, thirst, and fear—dangers included stone-throwing motorists and a mountain lion—but also of asserting Indigenous and working-class humanity in a capitalist society where oil extraction, deforestation, and substance abuse wreck communities. Running through mountains, deserts, and cities, and through the Mexican territory his parents left behind, Álvarez forges a new relationship with the land, and with the act of running, carrying with him the knowledge of his parents’ migration, and—against all odds in a society that exploits his body and rejects his
spirit—the dream of a liberated future.

NOÉ ÁLVAREZ was born to Mexican immigrant parents and raised working-class in Yakima, Washington. He lives in Boston, where, until recently, he worked as a security officer at one of the nation’s oldest libraries, the Boston Athenæum. Find out more at https://www.spiritrunbook.com/

Get 10% off when you purchase all three books together! Just enter coupon code: LITLIVE10 during checkout to save a few dollars and support three fabulous authors.