Timothy Egan at Bellingham High School, A Pilgrimage to Eternity: From Canterbury to Rome in Search of Faith 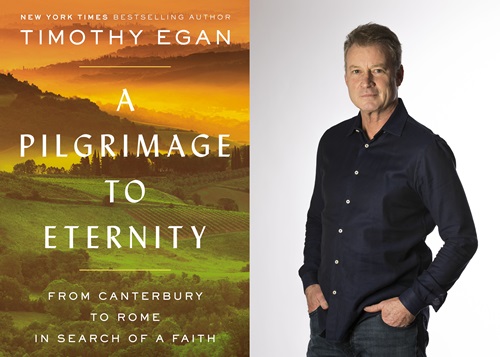 Village Books is proud to welcome Tim Egan back after a great turn as our Whatcom Reads featured author of 2019!

During a time when America, and much of Europe are increasingly secular, Pulitzer Prize-winning journalist and bestselling author, Timothy Egan set out to reckon with his own beliefs. Prompted by his Irish Catholic family's complicated history with the church and in the wake of his mother’s death, Egan decided to follow in the footsteps of centuries of seekers.

A Pilgrimage to Eternity: From Canterbury to Rome in Search of a Faith traces his deeply personal, modern pilgrimage through a European dreamscape—the 1,000-mile-long Via Francigena. On his journey, Egan charts the history of Western Christianity by visiting the people and places that shaped the religion, all the while exploring one of the biggest stories of our time: the collapse of religion in the world that it created.

A Pilgrimage to Eternity is an adventure across time and terrain, and a search for divinity and the pulse of spirituality. Along the Via Francigena, once the major medieval trail leading the devout to Rome, Egan makes his way overland via the alpine peaks and small mountain towns of France, Switzerland and Italy. The goal: walking to St. Peter's Square, in hopes of meeting the galvanizing pope who is struggling to hold church together through the worst crisis in half a millennium. Making his way through a landscape laced with some of the most important religious landmarks, Egan is accompanied by a quirky cast of fellow pilgrims and by some of the towering figures of the faith—Joan of Arc, Henry VIII, Martin Luther, Saint Francis and Pope Francis.

Timothy Egan is a Pulitzer Prize-winning reporter and the author of eight other books, most recently The Immortal Irishman, a New York Times bestseller. His book on the Dust Bowl, The Worst Hard Time, won a National Book Award for nonfiction. His account of photographer Edward Curtis, Short Nights of the Shadow Catcher, won the Carnegie Medal for nonfiction. He writes a biweekly opinion column for The New York Times.

A Pilgrimage to Eternity: From Canterbury to Rome in Search of a Faith (Hardcover)

The Big Burn: Teddy Roosevelt and the Fire that Saved America (Paperback)

The Worst Hard Time: The Untold Story of Those Who Survived the Great American Dust Bowl (Paperback)

The Immortal Irishman: The Irish Revolutionary Who Became an American Hero (Paperback)

Short Nights of the Shadow Catcher: The Epic Life and Immortal Photographs of Edward Curtis (Paperback)

The Good Rain: Across Time & Terrain in the Pacific Northwest (Vintage Departures) (Paperback)

Lasso the Wind: Away to the New West (Vintage Departures) (Paperback)