CANCELED: Veronica Roth at the SPARK Museum of Electrical Invention! 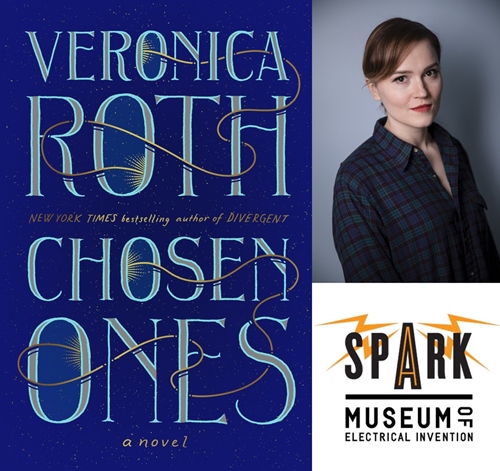 Due to health concerns, this event has been canceled.

Village Books and the Bellingham Public Library are pleased to co-host Veronica Roth, bestselling author of the Divergent series, at the SPARK Museum of Electrical Invention!  Chosen Ones is Roth's first novel for adults and for fans of her previous books, this one does NOT disappoint.
CHOSEN ONES opens ten years after five ordinary teenagers have saved the world from an impossibly powerful entity wreaking havoc across North America. In the subsequent decade the world went back to normal . . . for everyone but them. Because what happens when you’ve saved the earth from destruction, and become one of the most famous people in the world? Where do you go from there? Chosen Ones is the story of what happens next, when this group reunites as adults for a new battle they never dreamed they’d have to fight. Veronica’s protagonists are, as she writes, “the ones who bore heavy burdens on behalf of people older and wiser than they were….How do they cope with being famous for the same thing that brought them trauma, death, and loss? How do they move on? Can they?” These questions of how to be an adult in the face of pain, and of doing the dirty work for an older generation, are ideas that resonate especially hard in today’s world.

“With CHOSEN ONES, Veronica Roth has pulled off a virtuoso performance, conjuring a stunning thriller/fantasy/sci-fi chimera like nothing I’ve read before, a story of ex-heroes struggling with the trauma of their past, what it means to have once saved the world, and the dark side of destiny.”
—Blake Crouch, New York Times bestselling author of Recursion

Veronica Roth is the #1 New York Times best-selling author of  the Divergent series (Divergent, Insurgent, Allegiant, and Four: A Divergent Collection), the Carve the Mark duology (Carve the Mark, The Fates Divide), The End and Other Beginnings collection of short fiction, and many short stories and essays.

Thank you to the Bellingham Public Library for helping us host Veronica Roth in Bellingham! Space is limited so get there early. A seat is not guaranteed!

The SPARK Museum of Electrical Invention is located at 1312 Bay St, Bellingham, WA 98225.