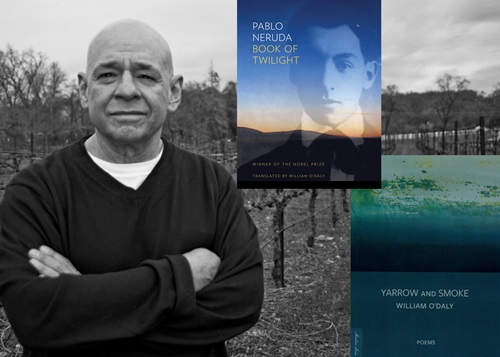 In Book of Twilight, we meet Pablo Neruda poised to become one of the most beloved writers of our time. In this first book, Neruda’s voice is recognizable—wildly romantic, musical, bold—fluctuating between formality and rebellion. In William O’Daly’s superb and lyrical translation, this volume awakens a raw, poetic power that heralds genius.

Yarrow and Smoke, the second title in Folded Word Press’s Masters Series, reveals William O’Daly’s ability to infuse human truth with the landscapes that shape it. It is his love song to gray valley and starless river, to High Sierra trails and self-discovery. At the edge of firelight, taste the night wind steeped in yarrow and smoke.

William O’Daly has translated eight books of the late-career and posthumous poetry of Chilean Nobel laureate Pablo Neruda, and most recently Neruda’s first volume, Book of Twilight, a finalist for the 2018 Northern California Book Award in Translation. All nine Neruda translations are published by Copper Canyon Press. O’Daly’s books of poems include The Whale in the Web, also published by Copper Canyon, as well as The Road to Isla Negra (2015), Water Ways (2017, a collaboration with JS Graustein), and Yarrow and Smoke (2018), the latter three published by Folded Word Press. A National Endowment for the Arts Fellow, O’Daly was a finalist for the 2006 Quill Award in Poetry and was profiled by Mike Leonard for The Today Show. A three-time Pushcart Prize nominee, his poems, translations, essays, and reviews have been published in numerous journals and as part of multimedia exhibits and performances. His essay “Creative Collisions: Poetry as a Transformative Act” was a finalist for Tiferet Journal’s 2018 Writing Contest. He has received national and regional honors for literary editing and instructional design, was a co-founder of Copper Canyon Press, and served on the board of Poets Against War. Most recently, he was awarded by the State of California for his written and editorial contributions to the California Water Plan.

The Road to Isla Negra (Paperback)