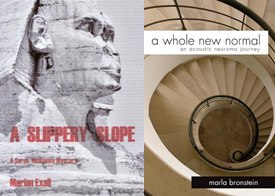 Local writers Marian Exall, A Slippery Slope, and Marla Bronstein, A Whole New Normal, both chose to self-publish their work in 2013. Exall has written a mystery novel featuring a female protagonist, while Bronstein's book is a memoir about her struggle with acoustic neuroma. Learn about their individual writer's journeys and how their books are faring in the rapidly changing world of publishing. VB's Brendan Clark will also be on hand to discuss local self-publishing options.

About Marian Exall, A Slippery Slope:

A Slippery Slope introduces Sarah McKinney, lawyer and international mediator. Celebrating the conclusion of a case in London, she is hit by a stray bullet. When she meets the intended targets, a beautiful young Jordanian woman and her lover, a journalist on the hunt for the hidden spoils of Middle-Eastern strongmen, she is drawn into a criminal intrigue that follows her home to Decatur, Georgia. The Sphinx has the answers, but who has the Sphinx?

After a career as an employment lawyer, Marian Exall now writes what she loves to read: mysteries. Like her heroine, Sarah McKinney, Marian was born and raised in England. She lived for thirty years in Atlanta before moving to Bellingham in 2006. A Slippery Slope is her debut novel. For more information: www.marianexall.com.

A few years ago, Marla Bronstein was diagnosed with an Acoustic Neuroma, a brain tumor, a benign schwannoma growing on the eighth crainial nerve. By the time it was discovered, it was large enough to be pressing on her brain stem. As do most of us with a computer and an internet connection, Marla went straight to the internet for answers to her questions. She found out what it was, treatment options, and read personal stories of resulting recoveries from long, frightening surgery.  Marla wanted more information than she could find, so she wrote the book she needed to read after her diagnosis.

Marla Bronstein was born in New York and believes her brain tumor was born while she was living in California. Marla now makes her home in the Pacific Northwest. Multi-tasking has always been her favorite sport. While preparing for and recovering from surgery, she wrote and produced 120 minutes of GimmeAMinute which can be found on your local YouTube channel. Marla lives in Bellingham with her husband Ken. Her favorite children are Zoe and Caleb.