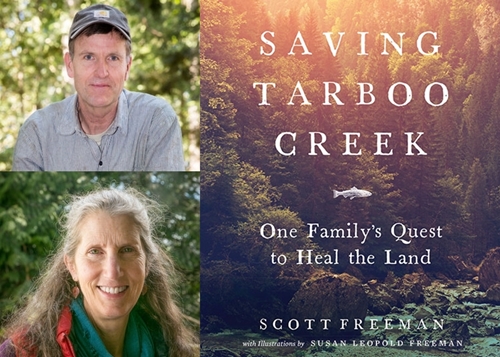 Portland, Oregon—January, 2018: What can one family do to change the world? Saving Tarboo Creek, a new book by biologist, professor, and legacy conservationist Scott Freeman, sets out to explore that question. Together with his wife (Susan Leopold Freeman) and sons, the Freemans purchased 17 acres of clear-cut land on Washington’s Olympic Peninsula. Through the center of the property runs a small creek, an ancient salmon stream badly damaged by a century’s worth of ditching, clearcutting, and channeling. Saving Tarboo Creek follows the Freemans as they work to rehabilitate the land back to a natural state. They knew the task ahead would be formidable: pollution, climate change, funding, curious beavers—there were many roadblocks waiting for them along the way. But the Leopold’s held a special key: a core belief in their duty that could not be shaken.

Scott Freeman teaches biology at the University of Washington, where he received a Distinguished Teaching Award. His textbooks Evolutionary Analysis and Biological Science are in their sixth editions, and he is recognized as a world authority on undergraduate biology education. Susan Leopold Freeman received a BFA from the School of the Art Institute of Chicago. She paints, teaches piano, and creates mosaics and fabric art.