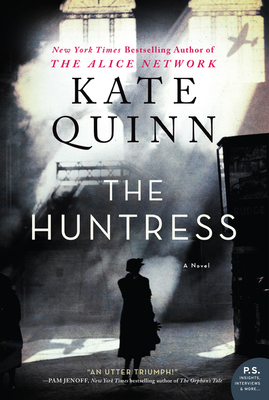 The Huntress by Kate Quinn

From the author of the New York Times and USA Today bestselling novel, The Alice Network, comes another fascinating historical novel about a battle-haunted English journalist and a Russian female bomber pilot who join forces to track the Huntress, a Nazi war criminal gone to ground in America.

Kate Quinn is the New York Times and USA Today bestselling author of historical fiction. A native of Southern California, she attended Boston University, where she earned bachelor’s and master’s degrees in classical voice. A lifelong history buff, she has written four novels in the Empress of Rome Saga and two books set in the Italian Renaissance before turning to the 20th century with The Alice Network, The Huntress, and The Rose Code. All have been translated into multiple languages. She and her husband now live in California with three black rescue dogs.

The Huntress: A Novel (Paperback)