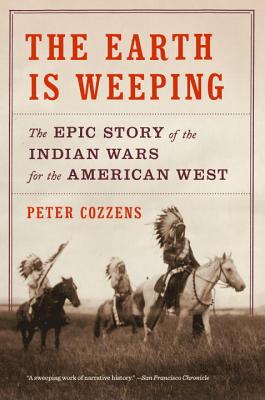 The Earth is Weeping: The Epic Story of the Indian Wars for the American West by Peter Cozzens  *We will be discussing this book at our June AND July meetings!

After the Civil War the Indian Wars would last more than three decades, permanently altering the physical and political landscape of America. Peter Cozzens gives us both sides in comprehensive and singularly intimate detail. He illuminates the intertribal strife over whether to fight or make peace; explores the dreary, squalid lives of frontier soldiers and the imperatives of the Indian warrior culture; and describes the ethical quandaries faced by generals who often sympathized with their native enemies. In dramatically relating bloody and tragic events as varied as Wounded Knee, the Nez Perce War, the Sierra Madre campaign, and the Battle of the Little Bighorn, we encounter a pageant of fascinating characters, including Custer, Sherman, Grant, and a host of officers, soldiers, and Indian agents, as well as great native leaders such as Crazy Horse, Sitting Bull, Geronimo, and Red Cloud and the warriors they led.

The Earth Is Weeping is a sweeping, definitive history of the battles and negotiations that destroyed the Indian way of life even as they paved the way for the emergence of the United States we know today.

Peter Cozzens is the author or editor of seventeen acclaimed books on the American Civil War and the Indian Wars of the American West, and a member of the Advisory Council of the Lincoln Prize. In 2002 he was awarded the American Foreign Service Association's highest honor, the William R. Rivkin Award, given annually to one Foreign Service Officer for exemplary moral courage, integrity, and creative dissent.

The Earth Is Weeping: The Epic Story of the Indian Wars for the American West (Paperback)