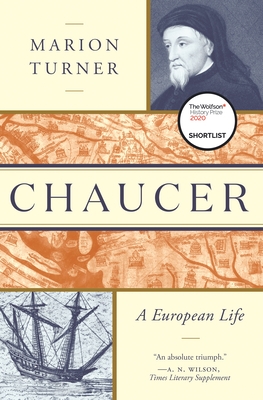 Chaucer: A European Life by Marion Turner           *We will be discussing this book at our August AND September meetings!

An acclaimed biography that recreates the cosmopolitan world in which a wine merchant's son became one of the most celebrated of all English writers.

Geoffrey Chaucer is often called the father of English literature, but this acclaimed biography reveals him as a great European writer and thinker. Uncovering important new information about Chaucer's travels, private life, and the circulation of his writings, Marion Turner reconstructs in unprecedented detail the cosmopolitan world of Chaucer's adventurous life, focusing on the places and spaces that fired his imagination. From the wharves of London to the frescoed chapels of Florence, the book recounts Chaucer's experiences as a prisoner of war in France, as a father visiting his daughter's nunnery, as a member of a chaotic Parliament, and as a diplomat in Milan. At the same time, the book offers a comprehensive exploration of Chaucer's writings. The result is a landmark biography and a fresh account of the extraordinary story of how a wine merchant's son became the poet of The Canterbury Tales.

Marion Turner is professor of English at Jesus College, University of Oxford.