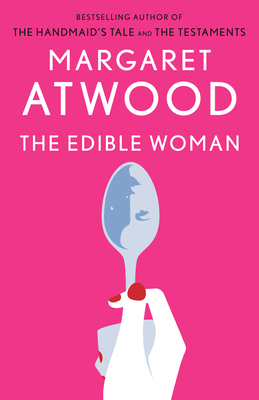 The Edible Woman by Margaret Atwood

Marian McAlpin is an “abnormally normal” young woman, according to her friends. A recent university graduate, she crafts consumer surveys for a market research firm, maintains an uneasy truce between her flighty roommate and their prudish landlady, and goes to parties with her solidly dependable boyfriend, Peter. But after Peter proposes marriage, things take a strange turn. Suddenly empathizing with the steak in a restaurant, Marian finds she is unable to eat meat. As the days go by, her feeling of solidarity extends to other categories of food, until there is almost nothing left that she can bring herself to consume. Those around her fail to notice Marian’s growing alienation—until it culminates in an act of resistance that is as startling as it is imaginative. Marked by blazingly surreal humor and a colorful cast of eccentric characters, The Edible Woman is a groundbreaking work of fiction.