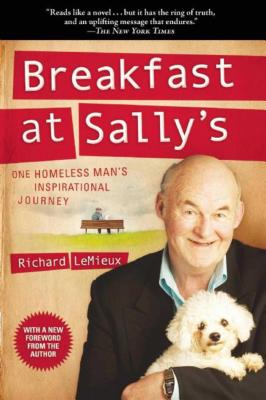 Once a happily married businessman, avid golfer, and the proud owner of several luxury cars and three boats, conservative-minded Richard LeMieux saw his fortune change almost overnight. In this astonishingly heartfelt memoir, he describes his descent into homelessness and his struggle to survive personal and economic disaster. Evicted from his home in 2002 and living with his dog, Willow, in a beat-up old van, LeMieux finds himself penniless and estranged from his family and friends. He dines at the Salvation Army (aka Sally’s), attempts suicide, and is treated at a mental hospital where he is diagnosed with depression.

Writing on a secondhand manual typewriter, first at a picnic table in a public park, and then wherever he can, LeMieux describes his odyssey and the quirky, diverse, and endearing cast of characters found among the homeless people of Bremerton, Washington, and, by extension, everywhere else. Breakfast at Sally’s is a rare inside-look at how the other America lives, and how one man, beaten down and alone, was able to reconnect, find good people, and ultimately, with their help, to persevere.