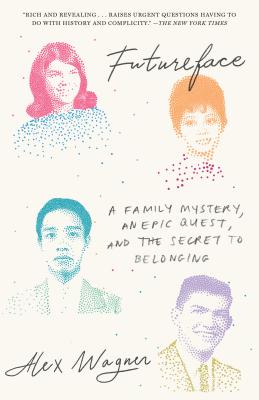 Futureface: A Family Mystery, an Epic Quest, and the Secret to Belonging by Alex Wagner

The daughter of a Burmese mother and a white American father, Alex Wagner grew up thinking of herself as a “futureface”—an avatar of a mixed-race future when all races would merge into a brown singularity. But when one family mystery leads to another, Wagner’s post-racial ideals fray as she becomes obsessed with the specifics of her own family’s racial and ethnic history.

Drawn into the wild world of ancestry, she embarks upon a quest around the world—and into her own DNA—to answer the ultimate questions of who she really is and where she belongs. The journey takes her from Burma to Luxembourg, from ruined colonial capitals with records written on banana leaves to Mormon databases, genetic labs, and the rest of the twenty-first-century genealogy complex. But soon she begins to grapple with a deeper question: Does it matter? Is our enduring obsession with blood and land, race and identity, worth all the trouble it’s caused us?

Wagner weaves together fascinating history, genetic science, and sociology but is really after deeper stuff than her own ancestry: in a time of conflict over who we are as a country, she tries to find the story where we all belong.

Futureface: A Family Mystery, an Epic Quest, and the Secret to Belonging (Paperback)