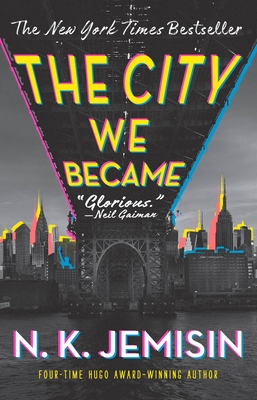 Join Gaye from Village Books, Lynden, and the Front Streeters book group as they discuss books from a variety of genres.  We meet on the third Wednesday of each month at 7pm on Zoom. All are welcome!
Registration is required.

The City We Became by N. K. Jemisin

Three-time Hugo Award-winning and New York Times bestselling author N.K. Jemisin crafts her most incredible novel yet, a "glorious" story of culture, identity, magic, and myths in contemporary New York City. In Manhattan, a young grad student gets off the train and realizes he doesn't remember who he is, where he's from, or even his own name. But he can sense the beating heart of the city, see its history, and feel its power. In the Bronx, a Lenape gallery director discovers strange graffiti scattered throughout the city, so beautiful and powerful it's as if the paint is literally calling to her. In Brooklyn, a politician and mother finds she can hear the songs of her city, pulsing to the beat of her Louboutin heels. And they're not the only ones. Every great city has a soul. Some are ancient as myths, and others are as new and destructive as children. New York? She's got six.

"It's a glorious fantasy, set in that most imaginary of cities, New York. It's inclusive in all the best ways, and manages to contain both Borges and Lovecraft in its fabric, but the unique voice and viewpoint are Jemisin's alone."—Neil Gaiman

N. K. Jemisin is the first author in history to win three consecutive Best Novel Hugo Awards, all for her Broken Earth trilogy. Her work has also won the Nebula, Locus, and Goodreads Choice Awards. She has been a reviewer for the New York Times Book Review, and an instructor for the Clarion and Clarion West writing workshops. In her spare time, she is a gamer and gardener, and she is also single-handedly responsible for saving the world from King Ozzymandias, her dangerously intelligent ginger cat, and his phenomenally destructive sidekick Magpie.

The City We Became: A Novel (The Great Cities #1) (Paperback)