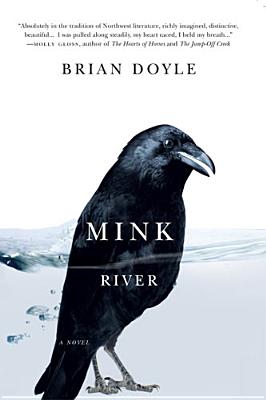 Like Dylan Thomas' "Under Milk Wood" and Sherwood Anderson's "Winesburg, Ohio, " Brian Doyle's stunning fiction debut brings a town to life through the jumbled lives and braided stories of its people.
In a small fictional town on the Oregon coast there are love affairs and almost-love-affairs, mystery and hilarity, bears and tears, brawls and boats, a garrulous logger and a silent doctor, rain and pain, Irish immigrants and Salish stories, mud and laughter. There's a Department of Public Works that gives haircuts and counts insects, a policeman addicted to Puccini, a philosophizing crow, beer and berries. An expedition is mounted, a crime committed, and there's an unbelievably huge picnic on the football field. Babies are born. A car is cut in half with a saw. A river confesses what it's thinking. . .

It's the tale of a town, written in a distinct and lyrical voice, and readers will close the book more than a little sad to leave the village of Neawanaka, on the wet coast of Oregon, beneath the hills that used to boast the biggest trees in the history of the world.

Brian Doyle (1956-2017) was the longtime editor of Portland Magazine at the University of Portland, in Oregon. He was the author of six collections of essays, two nonfiction books, two collections of “proems,” the short story collection Bin Laden’s Bald Spot, the novella Cat’s Foot, and the novels Mink River, The Plover, and Martin Marten. He was also the editor of several anthologies, including Ho`olaule`a, a collection of writing about the Pacific islands.

Doyle’s books have seven times been finalists for the Oregon Book Award, and his essays have appeared in The Atlantic Monthly, Harper’s, Orion, The American Scholar, The Sun, The Georgia Review, and in newspapers and magazines around the world, including The New York Times, The Times of London, and The Age (in Australia). His essays have also been reprinted in the annual Best American Essays, Best American Science & Nature Writing, and Best American Spiritual Writing anthologies.

Among various honors for his work is a Catholic Book Award, three Pushcart Prizes, the John Burroughs Award for Nature Essays, Foreword Reviews' Novel of the Year award in 2011, and the Award in Literature from the American Academy of Arts and Letters in 2008 (previous recipients include Saul Bellow, Kurt Vonnegut, Flannery O’Connor, and Mary Oliver).