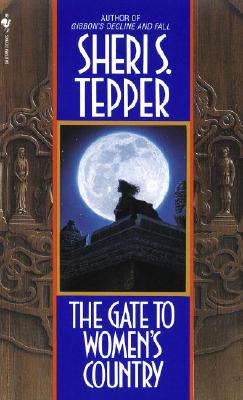 The Gate to Women's Country: A Novel by Sheri S. Tepper

Since the flames died three hundred years ago, human civilization has evolved into a dual society: Women’s Country, where walled towns enclose what’s left of past civilization, nurtured by women and a few nonviolent men; and the adjacent garrisons where warrior men live—the lost brothers, sons, and lovers of those in Women’s Country.

Two societies. Two competing dreams. Two ways of life, kept apart by walls stronger than stone. And yet there is a gate between them. . . .

The Gate to Women's Country: A Novel (Mass Market)