Hana Recommends: The War Outside 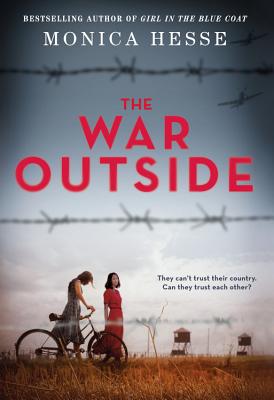 “I know the way I am telling these stories seems mundane and boring. Horror grows out of mundanity. If you’re paying attention, it always starts small. We all tell the versions we wish were true.”*
*Quote taken from ARC (advanced reader's copy) and may change in final printing.

There are a lot of World War II stories. Some people claim to be tired of them. I, on the other hand, am always drawn to them. There are so many stories to tell during this time, so many atrocities committed, so many lives affected, how could anyone have possibly heard them all? Well, I am here to tell you, Monica Hesse’s newest is a story you haven’t heard before, and even if you consider yourself “tired” of tales set during this time, you should really give this one a shot.

Haruko and Margot meet in Crystal City, Texas, an internment camp for those under suspect of working with the enemy. Neither of the girls has ever seen the places their parents came to America from, but it is because of this heritage that they are being detained. Crystal City was a real camp, where families of Japanese or German heritage were kept when suspect. These two young women are fictional, but represent real people imprisoned during this time.

Haruko is angry with her father. Why couldn’t he just stand up for himself when the government agent came to their home and accused him of passing along enemy messages? Why wouldn’t he say it wasn’t true? And because of this, she and her mother and little sister are forced to go to Crystal City if they want to be with him. Haruko wishes she could ask him these questions, but she’s afraid to know the answers. Meanwhile, her brother is off risking his life to be a war hero. Isn’t that enough for the agents to realize the Tanakas don’t belong in this camp?

Margot worries about her parents. Her mother’s health seems to be getting worse, and her father is being much too polite to the man with Nazi sympathies. After all, they were here by accident. He just went to that meeting as a favor to a friend, right? Margot too fears the answers to the questions she has for her father, but she does wish he was quicker to dismiss the party’s ideas.

Haruko and Margot come together by accident, but each end up becoming a lifeline for the other amongst the surrounding injustices. The two voices are wonderful and each distinctly their own. Haruko is bold and refuses to believe they belong at Crystal City, even as she worries about the truth. Margot is quieter, less open about herself, wishing she couldn’t see what was happening at home in front of her very eyes. As events progress, they will lean on each other, run away from each other, and lean on each other again, but neither can deny the bond that ties them together.

Powerfully exceptional, The War Outside manages to be compellingly quiet and impressively loud all at the same time. Hesse (author of Girl in the Blue Coat) writes with a vast knowledge and fierce passion for her subject matter, the lines on the page flowing in such a way that seems to literally carry you across the pages. A glorious writer telling a supremely lovely and difficult tale. You can’t ask for much more than that.

This feature require that you enable JavaScript in your browser.
END_OF_DOCUMENT_TOKEN_TO_BE_REPLACED

END_OF_DOCUMENT_TOKEN_TO_BE_REPLACED

This feature require that you enable JavaScript in your browser.
END_OF_DOCUMENT_TOKEN_TO_BE_REPLACED