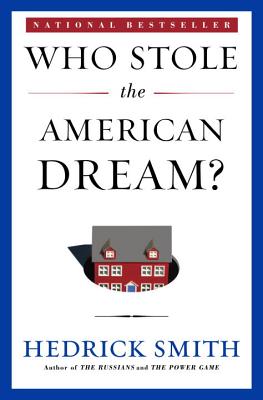 Last fall, Village Books hosted Pulitzer Prize-winner Hedrick Smith for his book, Who Stole the American Dream? to a standing-room only crowd. Hedrick will be returning to Bellingham to talk more about his book at Bellingham City Club. Smith's new book is an extraordinary achievement, an eye-opening account of how, over the past four decades, we have become two Americas. He takes us inside America to show the hidden, long-term process of landmark legislative, electoral and corporate decisions that have transformed us from an era of middle class power and prosperity and effective bipartisan politics to a new era of partisan gridlock, unequal democracy and even more unequal economics that have unraveled the American Dream for millions of middle class families.

Hedrick Smith, Pulitzer Prize-winning former New York Times reporter and editor and Emmy award-winning producer/correspondent, has established himself over the past 50 years of his career as one of America's most distinguished journalists. In 26 years with The New York Times, Smith covered Martin Luther King, Jr. and the civil rights struggle, the Vietnam War in Saigon, the Middle East conflict from Cairo, the Cold War with stints in both Moscow and Washington, and six American presidents and their administrations. In 1971, as chief diplomatic correspondent, he was a member of the Pulitzer Prize-winning team that produced the Pentagon Papers series. In 1974, he won the Pulitzer Prize for International Reporting from Russia and Eastern Europe. Smith has worked for PBS, produced dozens of prime time special reports, and won numerous awards. He is author of The Power Game and The Russians.

City Club of Bellingham meets at Northwood Hall. Doors open at 11:15am, a buffet lunch is served at 11:50 a.m., the program starts at 12:20 p.m. and ends at 1:30 p.m. Lunch costs $13 for members and $18 for non-members when purchased in advance on Brown Paper Tickets; IMPORTANT NOTE: ADVANCE TICKET SALES CLOSE at 10:30am, Monday, July 22nd, 2013. A limited number of tickets may be available at the door at the cost of $15 for members and $20 for guests. Learn more about his event at bellinghamcityclub.org. This program is open to the public. Village Books will be selling Hedrick’s book at this event.

This feature require that you enable JavaScript in your browser.
END_OF_DOCUMENT_TOKEN_TO_BE_REPLACED

END_OF_DOCUMENT_TOKEN_TO_BE_REPLACED

This feature require that you enable JavaScript in your browser.
END_OF_DOCUMENT_TOKEN_TO_BE_REPLACED