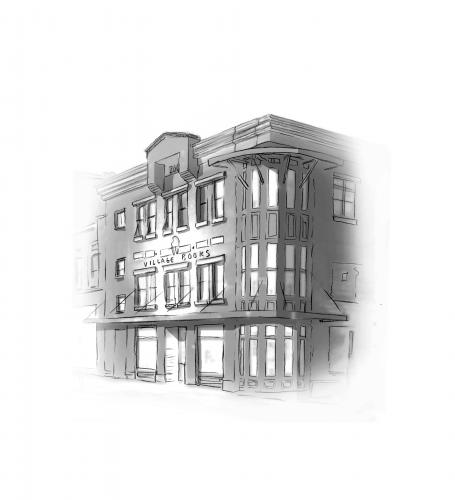 Come listen to Tom Robbins read his essay about why Village Books is his favorite Indie bookstore to browse, read and shop. His essay is one of eighty-two tributes written by well-known writers as part of the collection My Bookstore: Writers Celebrate Their Favorite Places to Browse, Read & Shop. This event is part of a My Bookstore Lit Crawl, in conjunction with four other Western Washington indie book stores.

To celebrate the publication of My Bookstore, five Western Washington bookstores are joining together to host a "Lit Crawl." Customers may attend any of the individual events at each bookstore, and will receive a stamp on a My Bookstore passport created just for the event, available at each participating store. Adventurous customers will be rewarded for acquiring three or more stamps. They will be entered for a chance to win some wonderful prizes. Customers who acquire stamps from all five events will be entered for a chance to win a fabulous prize package, which will include a book from each participating author and a copy of My Bookstore.

"Bookstores like libraries, are the physical manifestation of the wide world's longest, best, most thrilling conversation. The people who work in them will tell you who's saying what," writes Richard Russo in his introduction to My Bookstore, "…they'll put in your hand something you just have to read, by someone you’ve never heard of, someone just now entering the conversation, who wants to talk to you about things that matter."

Russo, along with eighty-two well-known writers share their tributes to bricks-and-mortar bookstores across the country. These enthusiastic, heartfelt, and often humorous testimonials highlight the importance and depth of the relationships between booksellers, readers, and writers, many of whom were customers before they were published authors. Collected and edited by Ronald Rice and Booksellers Across America, with an introduction by Russo, an afterword by Emily St. John Mandel, and illustrations by Leif Parsons, the contributors to My Bookstore include: Isabel Allende, Rick Bragg, Jon Clinch, Fannie Flagg, Ian Frazier, John Grisham, Pete Hamill, Elin Hilderbrand, Ann Hood, Pico Iyer, Ward Just, Ann Packer, Chuck Palahniuk, Ann Patchett, Edith Pearlman, Francine Prose, Tom Robbins, Adam Ross, Abraham Verghese -- to name only a few.

About Tom Robbins:
Tom Robbins, maverick author of eight juicy, daring and sagacious novels, is one of those rare writers who approach rock-star status, attracting SRO crowds at his personal appearances in Europe and Australia as well as in the United States. He lives primarily in the Skagit County area.

This feature require that you enable JavaScript in your browser.
END_OF_DOCUMENT_TOKEN_TO_BE_REPLACED

END_OF_DOCUMENT_TOKEN_TO_BE_REPLACED

This feature require that you enable JavaScript in your browser.
END_OF_DOCUMENT_TOKEN_TO_BE_REPLACED