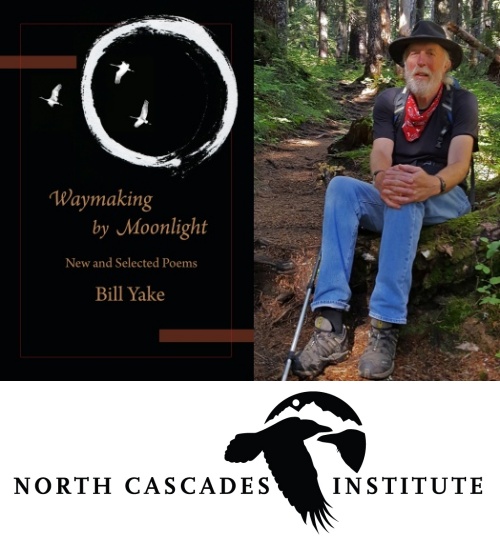 Join us on Zoom for an evening of poetry as part of the Nature of Writing series.

Waymaking by Moonlight is the definitive collection of fifty years of Bill Yake's observant, thoughtful, lyrical, and startling poems—poems of the natural world and the curious ways of humankind. It is an intimate journal of phenomena, discoveries gathered from the backcountry, as well as from the shelves of libraries and second-hand bookstores. These poems share the essences of rivers, friends, ancient trees, word origins, fungi, mountains, family, field guides, decay, and conversations overheard on rainy on cabin porches and around campfires visited, on moonless nights, by impulsive and unfettered winds.

Bill Yake has been making and publishing poems that celebrate the nature of the Pacific Northwest since the late 1960s. He’s worked lookouts, road construction, and cemeteries; fought forest fires, and during his 25-year career with Washington State's Department of Ecology as an environmental scientist and engineer, Bill diagnosed malfunctioning sewage treatment plants and tracked poisons in water, fish, and sediment. Paths have taken him into the mountains, the high desert, and the forests and prairies of the Puget Lowlands. His writings have appeared widely in publications serving environmental, scientific, and literary communities - these include Open Spaces, Orion, Rattle, Cascadia Review, and NPR's Krulwich's Wonders.

This feature require that you enable JavaScript in your browser.
END_OF_DOCUMENT_TOKEN_TO_BE_REPLACED

END_OF_DOCUMENT_TOKEN_TO_BE_REPLACED

This feature require that you enable JavaScript in your browser.
END_OF_DOCUMENT_TOKEN_TO_BE_REPLACED