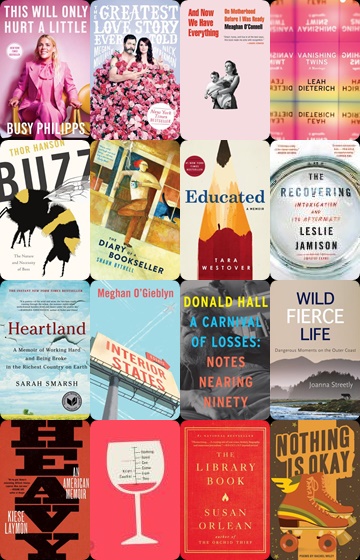 Sometimes you just want to hear it straight. It was a banner year for real-life stories. Here are a few of the nonfiction books that struck VB booksellers this year, and that we can’t wait for you to read.

Nothing Good Can Come From This by Kristi Coulter. "Once she realizes that she's doing mental calculations to determine if she's just a woman who drinks or if she's an alcoholic, Coulter sees that the next step is to get sober. The genius of this book is its honesty about a world that is less than hospitable to a smart, ambitious woman and the contortions we do to make ourselves fit." ~ Recommended by Sarah

Heavy: An American Memoir by Kiese Layamon. "Laymon touches on addiction, deprivation, anger, deception, and more but he does it in such a manner that each thing is integral to the next point he makes, the next memory he shares, the next piece of advice his mother gave him. Roxane Gay and Alexander Chee agree with me." ~ Recommended by Sarah

The Diary of a Bookseller by Shaun Bythell. "What's it like on the other side of the book counter? Herein lies the diary kept for a year by the owner of the The BookShop in Wigtown, Scotland." ~ Recommended by Diana

Everything's Trash, But It's Okay by Phoebe Robinson. "It's rare for a book to be laugh out loud funny, but the more I read of Phoebe Robinson's newest memoir the more I realized I couldn't read it in public. The lovely patrons of local coffee shops shouldn't be subjected to my witch cackle. Robinson is whip smart and funny as hell, this is a book I recommend to everyone." ~ Recommended by Hayden  "It's hard to even know how to begin heaping praise on these essays. Robinson acts like she's coming at you with a fun book full of Bono anecdotes and comedic hashtags, but her thoughts on body issues, money, and feminism are the real deal." ~ Recommended by Stephanie

Wild Fierce Life: Dangerous Moments on the Outer Coast by Joanna Streetly. "Written by the poet laureate of Tofino, this memoir traces Joanna Streetly’s life on the wild west coast of Vancouver Island. It’s a great escape to this one-of-a-kind (and rapidly changing) place and a powerful reminder of how nature shapes us." ~ Recommended by Mary

A Carnival of Losses: Notes Nearing Ninety by Donald Hall: "Before he died this year, Donald Hall reflected on aging and his remarkably creative life in this final essay collection that is achingly beautiful in its honesty and humor." ~  Recommended by Mary

The Library Book by Susan Orlean. "A love letter to libraries and a whodunnit that explores the mystery of the 1986 fire that nearly destroyed the Los Angeles Public Library. Through riveting reporting and gorgeous writing, Orlean reveals the extraordinary characters who built the L.A. Library and the story of the fire that consumed countless treasures." ~ Recommended by Mary

Heartland: A Memoir of Working Hard and Being Broke in the Richest Country on the Earth by Sarah Smarsh. "Read Smarsh’s memoir to hear a compelling, new Midwestern voice that encourages understanding rather than stereotypes of Americans who – despite working hard – cannot escape poverty. Read it also for the beauty of her language as she sketches loving, honest portraits of Kansas farming seasons and the women who set her on an extraordinary path of self-preservation." ~ Recommended by Mary

Buzz: The Nature and Necessity of Bees by Thor Hanson. "Prepare for the fascinating lives and history of bees, from when the first bees split from the wasps to offering them protection now. Hanson's narrative style makes the information flow in an easily digestible way and readers will come away knowing and appreciating more about bees than they ever thought possible!" ~ Recommended by Hana

Lab Girl by Hope Jahren (2017 release now available in paperback). "This biography is about a savvy science nerd who loves to examine plants, trees and dirt, all over the world, with her quirky lab partner, Bill. She brings her passion to life for those of us who are not scientists, and includes us in her humble, fascinating struggle to simply study and learn." ~ Recommended by Cindi

The Greatest Love Story Ever Told: An Oral History by Nick Offerman and Megan Mullally. "Nick and Megan are outrageously hilarious in their own right but put together they’re an unrelenting roller coaster of laughs, loves, and innuendos that will redden your cheeks. Live vicariously through them as they reminisce over their own meet cute, more than 15 years of marriage, and pictures of themselves with puzzles they’ve done that will melt event the coldest heartsicles." ~ Recommended by Abbie

Educated: A Memoir by Tara Westover. "I knew this was going to be a good book and a great read, but what I didn't expect was how incredibly touched I was and the shock and awe I experienced while reading it. Living off the grid without schooling, doctors’ visits or even a birth certificate, Tara was raised by a survivalist father and a naturalist midwife mother with the ever-looming threat of the Y2K. It’s a story of family, love, isolation, fear and change. Many of our life choices come at a cost, but sometimes that cost is exactly what is needed for us to become who we are destined to be. Tara Westover is incredible and inspiring as is her story. We are so blessed she decided to share it with the world. A must read!" ~ Recommended by Abbie

Vanishing Twins: A Marriage by Leah Dieterich. "This lyrical, vignette-style explores the complexity of relationships and delves into how queerness and dissatisfaction with monogamy affected Dieterich's marriage. If you liked The Argonauts by Maggie Nelson, you should read this." ~ Recommended by Stephanie

Interior States: Essays by Meghan O'Gieblyn. "This essay collection looks at conservatism, Christianity, addiction, artificial intelligence, Mike Pence and more through her specific knowledge and experience as a former evangelical. At its heart this isn't a condemnation of the Bible Belt, and I think readers off all backgrounds will find a lot to think about here." ~ Recommended by Stephanie

This Will Only Hurt a Little by Busy Phillips. "It would be easy to dismiss Busy Phillips as the peppy blonde actress from Dawson's Creek who loves to overshare on her Instagram. But this memoir shows that she is stronger, smarter, and more determined than anyone ever suspected. She lays bare her struggles with family, personal tragedy, post-partum depression, and sexual assault, and I put down her book with genuine respect and admiration for her." ~ Recommended by Stephanie

The Recovering: Intoxication and Its Aftermath by Leslie Jamison. "Jamison goes way beyond the typical addiction memoir prototype, supplementing her personal story with sections analyzing addiction and recovery through the mythologies, stereotypes, and falsities that have cropped up in the past century. Famous addicts crop up as she dissects the way their stories have been used to perpetuate gender stereotypes and demonize what many now believe to be more a sickness than a vice." ~ Recommended by Stephanie

And Now We Have Everything: On Motherhood Before I Was Ready by Meaghan O'Connell. "This is a brutally honest account of the complexity of becoming a parent, both good and bad (plus a year of PPD thrown in for good measure). For those who don't fit into the sunny, mommy-blog mold, this memoir might be a lifeline to a like-minded soul." ~ Recommended by Stephanie

Nothing is Okay by Rachel Wiley. "Beautiful, vibrant, and honest. Wiley explores topics like feminism, fatness, and queerness in this collection of poems. She critiques society and the way it has taught us how to treat ourselves and others, exploding the truth on loving yourself for all that you are." ~ Recommended by Jenni

This feature require that you enable JavaScript in your browser.
END_OF_DOCUMENT_TOKEN_TO_BE_REPLACED

END_OF_DOCUMENT_TOKEN_TO_BE_REPLACED

This feature require that you enable JavaScript in your browser.
END_OF_DOCUMENT_TOKEN_TO_BE_REPLACED